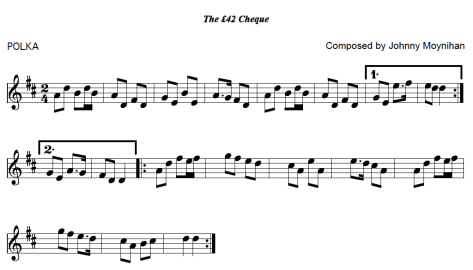 Johnny Moynihan has a position in traditional Irish music that is almost unique; he was a member of three of the most influential and innovative bands: Sweeney’s Men, Planxty and De Danann. He was also responsible for the introduction of the bouzouki into Irish music.

Moynihan bought a bouzouki from a friend who didn’t really know what to with it. Whether anyone else had a bouzouki in Ireland is not known and is less important than the fact that it was he who was primarily responsible for the almost ubiquitous position it occupies today, in so far as Andy Irvine, and then Donal Lunny and Alec Finn, would never have picked one up.

Johnny Moynihan also composed this tune. The story is that while waiting in a van as his lady companion paid a £42 cheque into a bank, the tune came to him. He self-deprecatingly describes it as ‘an amalgam of different tunes’ and a ‘hybrid of a polka’, but it has, in my less than humble opinion, real lift and joie de vivre.