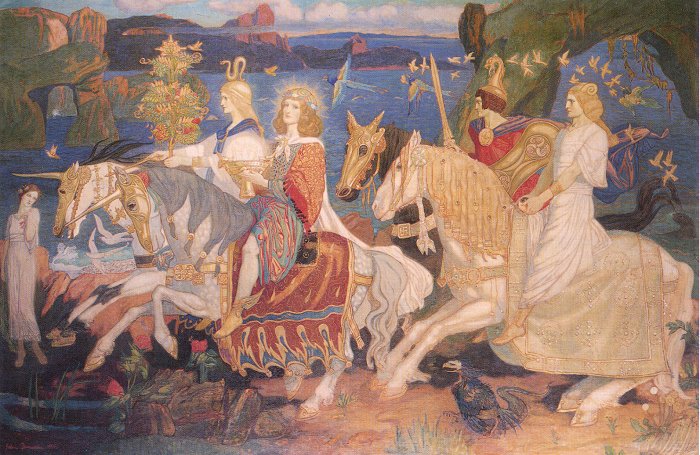 If ever a tune’s ancestry is cloaked in the mists of time, it’s this one. Both the Irish and the Scots claim this as their own. In Ireland it’s also known as Rory O’More and Rory of the Hills, whilst in Scotland it’s called Duncan MacRae of Kintail’s Lament and Colin Macrae of Inverinate’s Lament.

The Rory O’More (or O’Moore) appears to be a hero of Irish resistance to English colonisation in the 15th century, but that need not mean that that’s when the march was composed. Similarly, there have been MacRaes in Kintail since at least the 14th century. A very closely related tune, called Washington’s March, is in the supplement to the 3rd edition of Playford’s Dancing Master, published in 1657, a collection of English country dances.

The tune is usually transcribed in 6/8 time. But we feel that the way we play it it is more like 3/4, so that’s what we’re showing it as.

What we can say with total conviction is that it’s a flippin’ good tune!

Image: “RIDERS OF THE SIDHE” by John Duncan