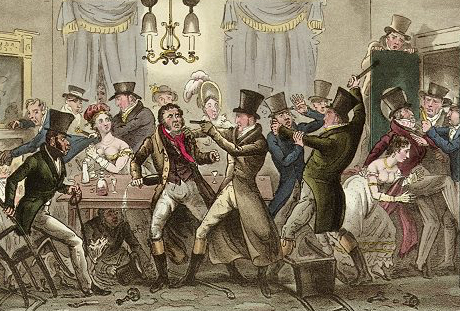 This is what is known as a ‘criminal’s goodnight’, a song supposedly composed by the condemned person on the eve of their execution.

There are loads of versions of this song, known variously as Newry Town, Flash Company, Adieu Adieu and probably some more I can’t think of right now. Oh yes, Wild and Wicked Youth is another one.

Although the protagonist was born in Cornwall, the action takes place in London. After a robbing/burgling spree our ‘hero’ is apprehended by the infamous Bow Street Runners, a quasi-official law enforcement agency, established by Henry Fielding. Fielding was a magistrate as well as an author. His most famous novel is The History of Tom Jones, a Foundling, published in 1749. Like Tom Jones, the protagonist in the song is certainly of the picaresque persuasion.

The song has a couple of puzzling features. First, there is ‘Ned Fielding’. This is usually taken to mean Henry, although occasionally it is thought to mean John Fielding, Henry’s half-brother and successor as the head of the Runners. I’ve also seen it mentioned that it refers to another brother, a bounty hunter, but there doesn’t seem to be any evidence for that. Moreover, ‘Ned’ is not a diminutive of either ‘Henry’ or ‘John’. However, Fielding’s father was Lt Gen Edmund Fielding, and Ned can certainly be a diminutive of Edmund. So, that’s one unsolved mystery.

Second, it is perfectly conceivable that the song’s protagonist was born in Cornwall and was arrested in London. What is most peculiar is that he was hanged at (St) Stephen’s Green, Dublin. Had he in fact hailed from Newry Town, the site of the execution becomes more plausible, but that would ignore the fact of his arrest in London. So, a second unsolved mystery.